A recent hike up Knocknacloghogue in the good company of Glenwalkers, was enhanced by some great views. The weather obliged with only a few light showers until our return journey, which only encouraged us to find a last spurt of energy to get us back up to Pier Gates. Along the way we saw some interesting flora and fauna. 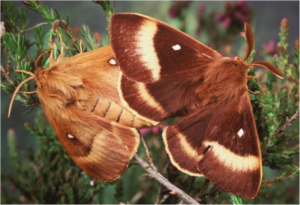 The hairy mollies I enthusiastically pointed out so they wouldn’t get stomped on were Northern Egger caterpillars. The Northern Egger is a big moth with a spot on each wing, and the female has a lighter colouring.

Another creature we saw, this time displaying amazing flight control, was a Kestrel.

This raptor is most easily recognised by its typical hunting behaviour which is to hover at a height above the ground over open country. It then swoops down on its prey, usually small mammals or insects. The kestrel we saw was making optimum use of the air stream coming up from Lough Dan to hover over an area near us, allowing us plenty of time to watch its air display. Later, as we basked in the sun at the shores of Lough Dan, we could hear the kestrel’s loud “kee kee kee” calls, which it does when agitated. I’m guessing other walkers had strayed close to its nest.